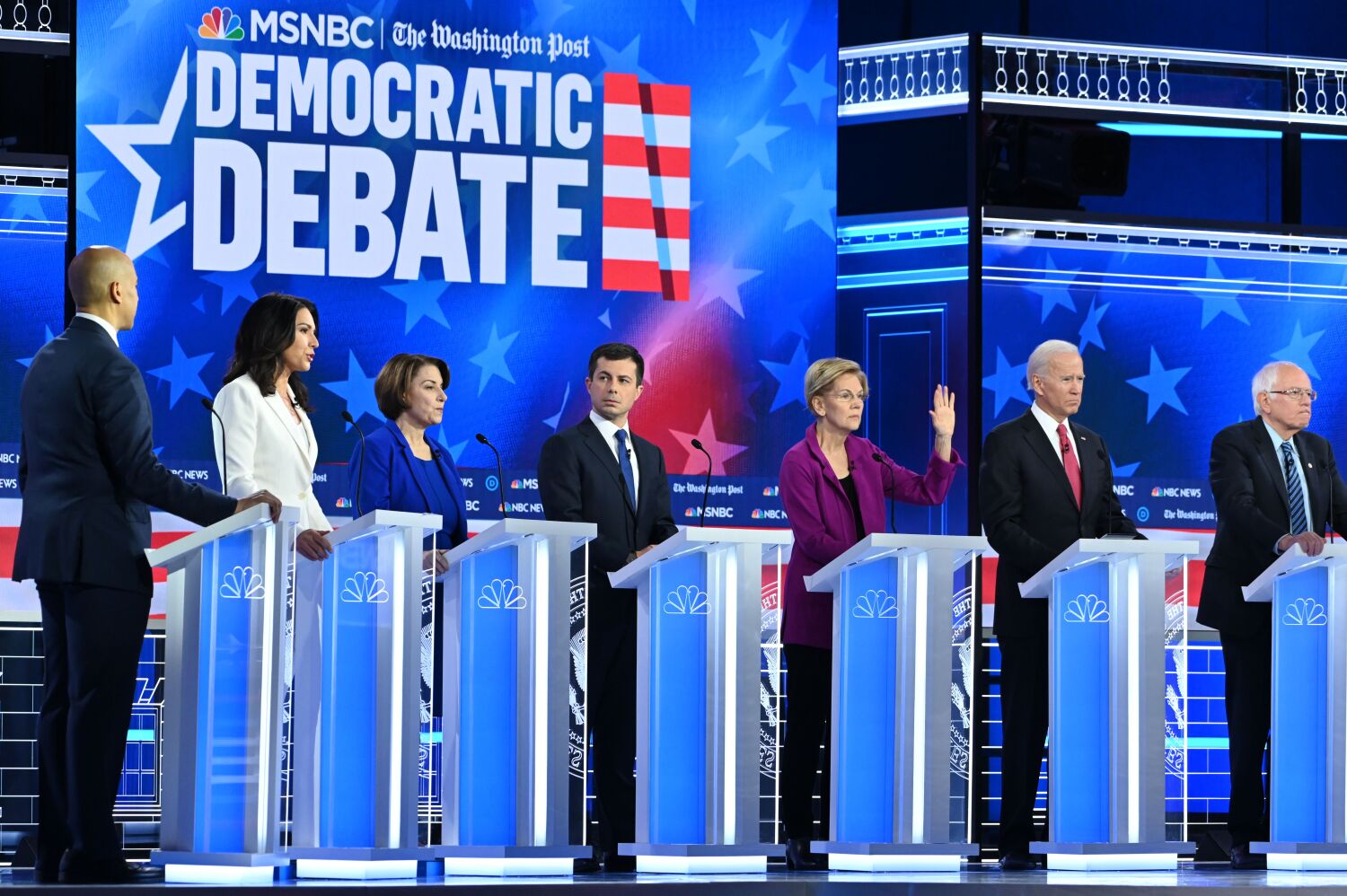 Democratic presidential candidates are slated to debate again Thursday, this time in Los Angeles. It would be nice if they discussed some specific needs of California.

Just one or two, maybe three, questions about problems particularly acute in this state. That shouldn’t be too much hassle.

California does, after all, comprise 12% of the U.S. population. We have one-third more people than the next largest state, Texas. Our economic growth outshines the country’s overall. California’s well-being is vital to the nation’s health.

So our dilemmas really are America’s, too. A president can be a great friend in helping to solve state problems — or an annoying troublemaker like President Trump.

Yes, a California-tilted debate is probably wishful thinking. And it’s possible this skirmish won’t even be held. On Friday, the candidates threatened to boycott the event because of a labor dispute at host Loyola Marymount University.

But assuming some debate will be held in California before the March 3 primary, I have a few suggested topics for the candidates:

We’ve had a deadly, destructive epidemic. Trump keeps accusing the Democratic state government of failing to clear the forests of dead trees and brush that fuel fires. Gov. Gavin Newsom, who hasn’t been in office even a year, “has done a terrible job of forest management,” the president bellows.

Fact check: The federal government owns and manages 57% of California’s 33 million acres of forests. Private landowners have about 40%. The state only owns 2.2% and local governments less than 1%.

Question for the wannabe presidents: If elected, will you promise to clean up your own forest mess? And consider joining the state in helping to clear out dead wood on private land?

It’s an old cliché, but what Mark Twain purportedly said is still true: “Whisky is for drinking, water’s for fighting over.” That’s particularly true in the West, especially in half-arid California.

The fiercest current fight is over water from the Sacramento-San Joaquin River Delta. The delta supplies drinking water for 25 million people and irrigation for 3 million acres. But there’s not enough for everyone who wants it in a growing population.

The West Coast’s largest estuary has been in environmental decline because of water transfers to San Joaquin Valley agriculture and Southern California cities. Salmon runs and the coastal fishing industry are threatened with going belly up.

The Trump administration is pressing to ship more delta water to San Joaquin agriculture interests. Delta farmers, the fishing industry and environmentalists are fighting the feds.

Question for candidates: Are you with the salmon or the pistachios?

As part of their federal income tax cut two years ago, Trump and the Republican Congress raised taxes significantly on many people who paid state income and local property taxes. A limit of $10,000 was placed on the amount of state and local tax payments that could be deducted on federal returns.

This socked people hard in high-tax states such as California and New York. An estimated 11 million taxpayers were hit nationwide. Last week, the House Ways and Means Committee passed a bill to lift the limit. But even if the measure gets to the Senate, Republicans are expected to kill it.

Question: Will you scrub the SALT limit and reduce taxes for many high-taxed Californians?

It’s a mess. L.A. County has nearly 60,000 homeless people. The population is at least 130,000 statewide. Sidewalks are littered with tents, and trash is strewn everywhere.

The state and local governments are trying all sorts of things, including more emergency shelters and tiny huts. But California badly needs help. We’re panhandling for federal dollars.

Question: As president, would you toss some loose change our way?

We have this pipe dream called a bullet train that’s way underfunded and far behind schedule. Everyone thinks high-speed rail — mimicking China, Japan and Europe — would be groovy. But those trains are subsidized by national governments. California is a big state, but it’s still only a state and can’t print money.

The last estimated tab for the Los Angeles-to-San Francisco bullet train was $79 billion. But this grand project is on a sidetrack and hardly discussed anymore. The state is now just trying to build a line through the San Joaquin Valley.

The feds have contributed only $3.4 billion and grabbed back $929 million of it. They don’t want to spend another cent. Private investors aren’t interested either. And California taxpayers would rather take the bus.

Question: Is high-speed rail in California of any interest at all? If so, how about some more bucks?

The country is so polarized that politicians are afraid to compromise on reform. Meanwhile, California is home to 2.2 million immigrants living here illegally, one-quarter of the country’s undocumented population.

Two years ago, the Legislature passed and Gov. Jerry Brown signed a so-called “sanctuary state” bill that limited law enforcement’s ability to help federal agents deport undocumented immigrants unless they’d been convicted of a serious crime. Trump is asking the Supreme Court to kill the law.

Questions: Will you work — earnestly work — to finally achieve immigration reform? And does California’s sanctuary law bother you? What should be changed about it as part of any compromise?

Voters should know the candidates’ views on these things before they cast ballots.